Sunil Patel’s love for pizza has led him to open 1000 Degrees Neapolitan Pizza in Turkey Creek.
Patel, franchise owner, held his store’s grand opening at its new location, 11071 Parkside Drive, between Noodles & Company and Watchdog Surveillance and
Spy Gear, Thursday, July 6. “I love pizza. It’s my favorite food. I always wanted to be in the food business and 1000 Degrees Neapolitan Pizza is
something I’ve not seen elsewhere in a casual, fast-food place,” Patel said. “Here, you walk in and have your pizza in less
than five minutes. We cook our pizzas at 1000 degrees so it really cooks fast.” Customers can choose from its classic signature pizzas or build their own with
unlimited toppings, he added. The toppings are out front where customers can pick them easily; they can choose a 10-inch or 14-inch dough and watch as the pizza is being made.
What makes his pizzas Neapolitan? “It’s the flour,” Patel said. “I use 00 Neapolitan-style flour. It’s the finest flour that is available.” The process he uses to make the dough also makes a Neapolitan pizza. While the cooking is done quickly, he said the process to get the dough ready is not. “We offer Roman style, which is thicker, and a regular thin crust,” Patel said. Along with pizzas, 1000 Degrees Neapolitan Pizza carries salads, wings and cheesy bread. The franchise, which is based out of New Jersey, is the 40th store nationwide but the only one in Tennessee, he said.
Patel chose to locate in Turkey Creek because “this was a hot spot, a lot of

The words “free pizza” might be the tastiest words ever spoken.

Just ask the hundreds of Knoxvillians who rushed to Turkey Creek and stood in line for hours at 1000 Degrees Neapolitan Pizza’s grand opening Thursday.

To celebrate its grand opening, the pizza shop offered one custom-order, 10-inch pizza for each customer.

Customers have more than 50 toppings to choose from to make a pizza that is truly theirs, Sunil Patel, owner of the Turkey Creek franchise, said.

Jennifer Scrugham, Stephanie Willis and Amy Fonseca arrived with nine kids right on time for their free pizza at 11 a.m. as doors opened.

“It was worth the wait,” Willis said.

“It was fun for the kids to get to customize their own pizza with as many toppings as they wanted,” Scrugham said.

After the grand opening, a 10-inch custom pizza will ring up for $7.95 with unlimited toppings. There is also a 14-inch pizza to customize, as well as specialty pizzas on the menu.

What makes it Neapolitan style?

The customization element of 1000 Degrees eatery is somewhat unique in the area, but it’s not unheard of. Patel said it’s the Neapolitan style of the pizza that changes Knoxville’s pizza game.

“It’s a whole process that starts with the flour,” he said. “Then you make the dough, and it cooks at more than 1000 degrees in two minutes.

“It’s crispy, and the taste is different.” 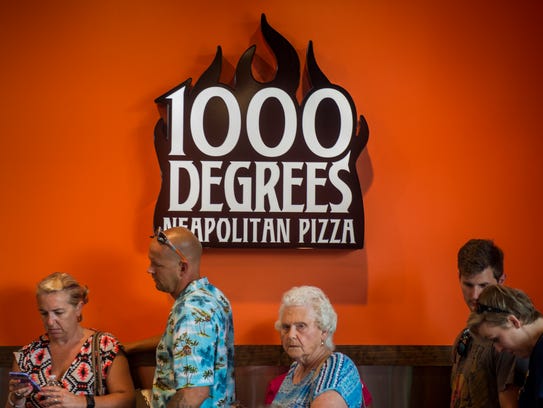 Build your own salads, break sticks and fire roasted chicken wings are also featured on the menu.